Miskolctapolca is situated in the valley of Hejő stream which is rich in natural beauty, and located in the eatern part of Bükk Mountain. It built from the late 19th century. First half of the 20th century it became a recreation area. The protected park of Miskolctapolca invites you for pleasant walks during any season. You can feed swans and wild ducks at the lake, where you can even go for a boat-ride in the summer. Children favour the playground at the edge of the forest with its funny jungle gyms and slides. 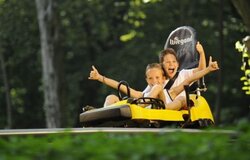 The Miskolctapolca bobsleigh run, operating in all seasons, opened its gates in 2007.
The 800 m long track was built in the neighbourhood of the Cave Bath and the Boat Lake, on the hillside. The maximum speed at the stainless steel track is 42 km/h, the drop in altitude is 54 m.
Safety is guaranteed on the bobsleigh run constructed with German precision – visitors can race among the trees. The track can be used in the evening, by artificial lights as well, which is unique in Hungary.

Anyone can use the track: from 3 years to 99 years of age. 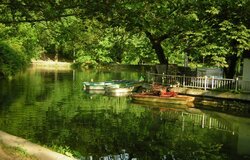 The romantic little lake located in the popular park in Tapolca, has become a memory of the inhabitants of Miskolc and visitors both as a sight and a boat lake, and greatly contributes to the enrichment of the aqua culture of Tapolca. The lake has been a home to swans and wild ducks for years, and they make the lake special.

The Boat Lake is a popular venue of events. It is full of life mainly during the summer season, when there are spectacular events and shows organised in its surroundings. 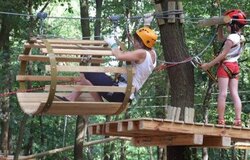 The Adventure Park set up in the proximity of the playground located in the park of Miskolctapolca currently holds 26 courses, one blue (easier) and a red (more difficult) track system.
The blue track is set 3-6 metres high, while the altitude of the red track is between 4-9 metres. The courses are made of different kinds of bridges (Vietnamese, log bridge, suspension bridge, Amazonas bridge) with a difficulty level changing in accordance with the colour of the courses.

Adventure for the entire family! 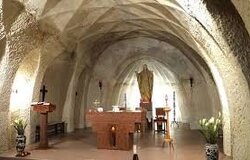 The cave of the ROCK CHAPEL was constructed in 1934 and sanctified in 1935. The altar holds the relic of the martyrs from Kosice. When renovated in 1995, there was a Székely gate erected in remembrance dr. Páter Szabó Pius, the initiator of the construction works. Dr. Páter Szabó Pius, dean from Transylvania, visited Miskolctapolca in 1934. At that time, Rudolf Pataky, his friend, showed him the two caves carved into tuff on the “Verebes tető”, that were used as sheepcotes.

The guest was overwhelmed by the beautiful view from the cave, therefore he suggested a cave chapel to be built there in service of the spiritual life of holiday visitors. The Chapel can be visited every Sunday between 10.00 a.m. and 11.00 a.m.